The thriving city is Breland’s gateway for trade with the Eldeen Reaches, and small barges ply the lake, providing ties to Aundair as well. Since Eldeen and Aundair were openly at war for most of the last century, Xandrar became a key link for what little trade the two nations could not avoid.

Mayor Garrit Tomraan governs the city, but the Countess Yassiv ir’Oeskai provides the city watch and administers the surrounding lands. The countess spends most of her time at her mansion within the city rather than at Drum Keep, the primary garrison of her holdings.

She and Garrit hold wildly different opinions on the Swords of Liberty problem that has infested the region in recent months. At first there was not much official reaction (the resistance has many followers in the border regions where losses were great during the Great Rising), but in recent months they have started to attack foreign traders and travellers potentially endangering trade relations with Aundair and the Eldeen Reaches. As a result the mayor has called for military action against them. The Countess ir’Oeskai, forced into what she considers an ill-advised and rash course of action, has subsequently withdrawn a large part of her forces in the City Guard for this campaign leaving the Guard severely understaffed. This has forced the city to start hiring mercenaries to help with policing the city. 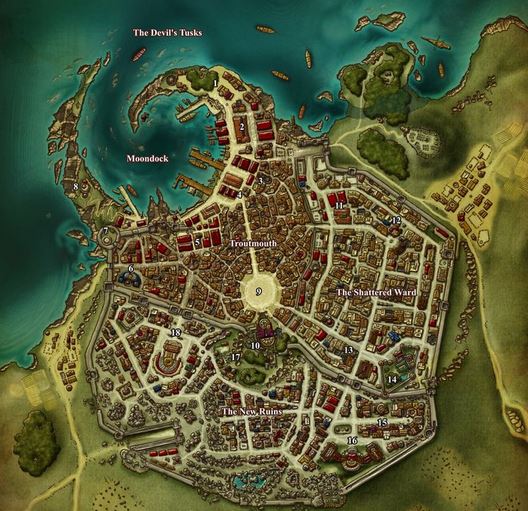 1 – Last Pint – a tavern and inn at the Silver River docks of Xandrar not known to be the nicest place, a favorite of most outlanders. Occasionally houses Ogres and other citizens of Droam.

2- House Vadalis Conclave – an excellent place to send your animals for training or to purchase magebred pets or mounts.

3 – House Orion Conclave – A stop on the caravan routes for trade throughout Khorvair. Routes go on to Wroat, Sharn, Thaolist, Arcanix and the Reeches. Passage may be booked through this site. No teleporting services available.

5 -Laski’s – A popular smithy selling fine wares of blacksmithing. Famous for their Shineplate, an alloy similar to steel that gleams twice as bright. Contracts with the city watch and general public of Xandrar make custom orders take longer than one might expect. Still, if it is made by Laski’s it is worth the wait.

6 – St Zols Pilar – A church devoted to the Soverign Host, in the center of the city proper. Healing services have been available in the past, although it has recently been pointed out that they do not have a healing licence with House Jorasco or the Healing Guild. Since then, the temple priest a shifter named Boval Windspear, has been reluctant to heal any but the most faithful to the church.

7- Black Yard – neither black, or a yard, this is the where the town troops are stationed. Rumour has it that there is an extensive underground network under this tower where troops are barracked. Currently many of the troops have been transferred to Drum Keep and numbers have been made up by mercenaries as well as agents of House Deneith and House Tharashk. It is fair to say that there is a certain level of antagonism between these groups that has led to some fistfights and a lot of unhealthy competition.

8 – Xandrar Tower – An ancient goblin tower in the centre of the closest goblin ruins of the original Xandrar. None who have entered this tower have ever returned. The nearby ruins are thought to be haunted

9 – Eldeen Freshmarket – Central point of the market district. This area consists of many temporary stalls where the freshest groceries can be found from the Reaches.

10 – Xandrar Building – Building where the local government and bureaucracy are based. The Mayor is housed here.

11 – Regalmanor – an upscale and expensive inn owned by House Gallanda.

12 – Morgrave Library of the Arcane – some scrolls of different varieties can be found there. It does house a small library mostly dedicated to local lore and general knowledge. Although it does have an astounding section on the wildlife of the Reaches and aquatic life in Lake Galifar.

14 – Oeskai Manor – The holdings of Yassiv ir’Oeskai within the city. Houses a small garrison of city watch as well as a temporary prison facility.

15 – The Falling Star tavern – has a docking tower manned by House Lyrander, and several private rooms and meeting areas but does not have any elemental airships based there.

16 – The Emporium – another market, but for items of particular value. This highly guarded area contains shops owned by tinkers, alchemists, hedge wizards and fabricators. Much of the space is filled with people selling arcane ingredients sourced through the Eldeen Reaches. Some of the shops in this area display the mark of the Gorgon showing that they are House Cannith approved in terms of quality. The rent is high for shopkeepers in the emporium, and the prices of the goods reflect that.

18 – The Theatre of the Green Water – A famous theatre run by House Phiarlan. Many travelling performers are welcomed here to do their thing. This leads to a wide variety of productions and quality. Some odd strangers have been seen going into the back doors of this theatre, but you get that with performers.

Ascendant campaigns can view previous versions of their pages, see what has changed (and who did it), and even restore old versions. It's like having a rewind button for your campaign.

We've already been saving your edits, so if you upgrade now you will have instant access to your previous versions. Plus, you get a 15-day free trial, so there's nothing to lose.